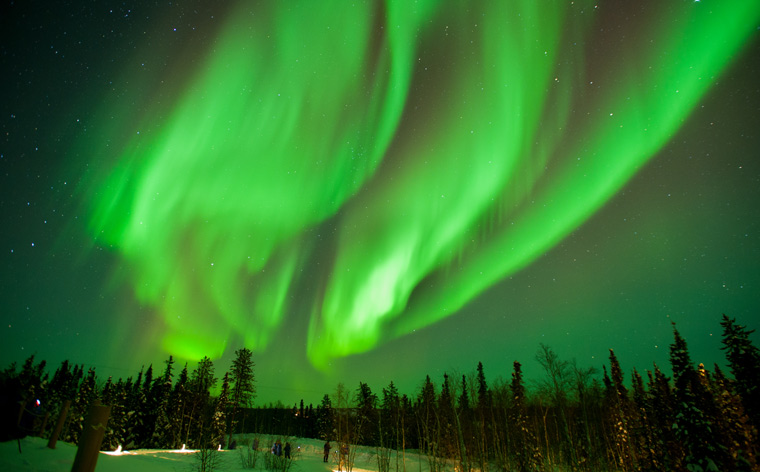 If you want to see the northern lights for yourself, you have to know where to go 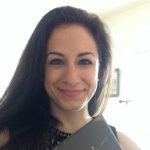 There’s no natural phenomenon like the vivid dancing lights of the aurora borealis. From the rugged isles of Scotland to the snow-covered expanses of Greenland, we show you the best places to see the northern lights.

Not sure where to start? Give momondo Anywhere search a try to see how far your budget can take you.

Search for flights with our interactive map 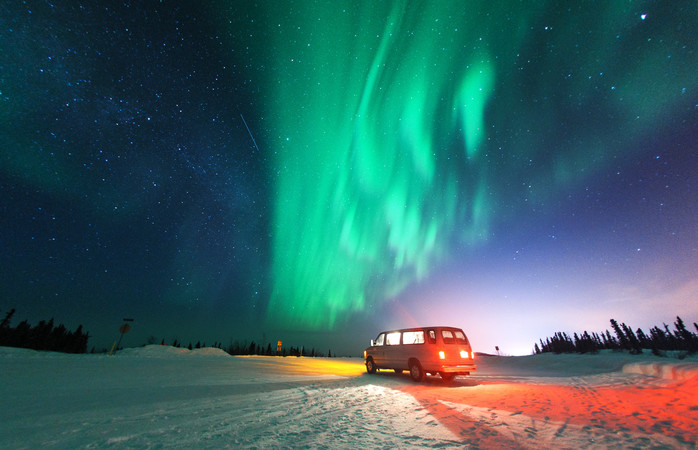 Checking in at a latitude of 65 degrees, Fairbanks is just below the “aurora oval”, the northern lights viewing hotspot. Head out to Cleary Summit on a moonless night for an epic light show of neon green, or make the drive to the oh-so-peaceful Denali National Park for your very own private viewing party. You can also check out the lights while soaking it up, spa-style at the Chena Hot Springs, or from the permafrost-covered wonderland of Nunivak Island. The best time to see the lights is between August and April, but plan your trip for March to take advantage of the longer days and slightly less chilly weather.

Find a flight to Fairbanks 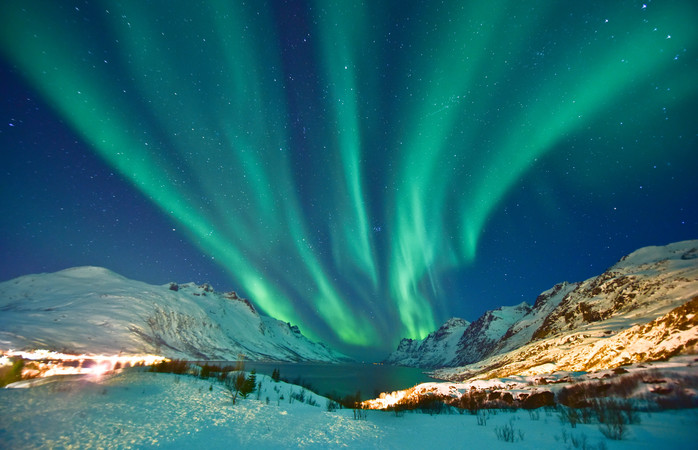 For 25 years, the aurora borealis has been celebrated in style at the Northern Lights Festival. Held during the last week of January, the festival features world-class music set against a backdrop of the northern lights. Tap your toe to some light jazz or marvel at a soprano’s range while you take in the dazzling, luminescent bands that stripe the sky at what locals call “nature’s own theatre”.

If it’s cloudy out, you can view a man-made version of the northern lights at the Tromsø University Museum. While you’re in town, explore Tromsø’s polar history at the Polar Museum and check out the views from the upper station of the Cable Car.

Find a flight to Tromsø 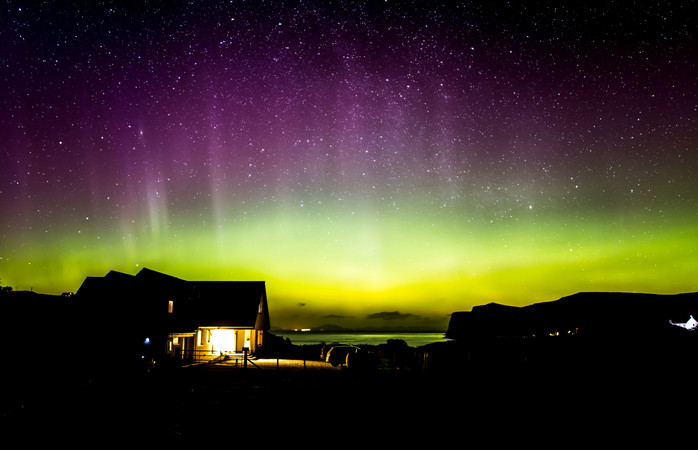 This perfectly named Scottish isle gives you a heads-up of what’s to come: stunning stargazing and a spectacular natural light show.

Sparsely populated and with nine Dark Sky Discovery Sites, it’s ideal for viewing what’s known in Scotland as the “Mirrie Dancers”. Head out to the famous Neist Point Lighthouse for a rugged viewpoint, or try the Shulista Croft Wigwams on the Trotternish Peninsula. The peninsula is rich with rock formations such as Old Man Storr and the Quiraing, which are worthy of daytime exploration. Additionally, ancient castles and curious ruins dot the lush countryside, giving you plenty to explore while waiting for the lights to make an appearance.

Read more: don’t leave the country without embarking on the whisky trail – our road trip through Scotland.

Find a flight to Inverness 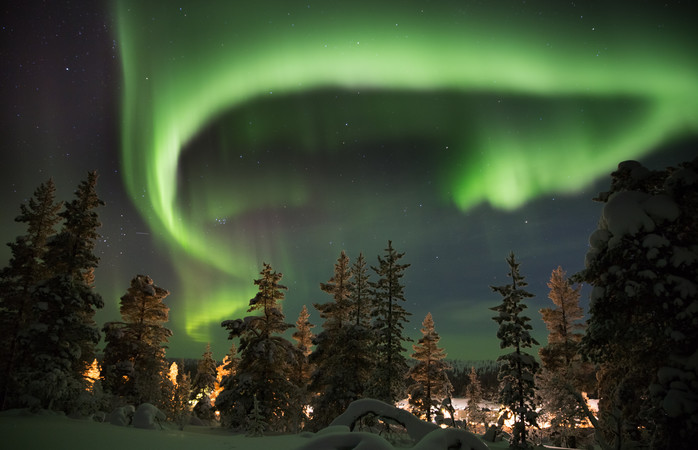 Just nine kilometres from the Russian border in Finnish Lapland, Nellim is an unassuming village with a well-kept secret: it’s an ideal place to view the aurora borealis. Nestled amidst forested fells and snow-capped peaks, it dates back to the Stone Age, and is infused with Sami culture. Marvel at the lights from the shores of Lake Inari, head to Paatsjoki Bridge for an idyllic vantage point, or climb into a glass igloo for laid-back viewing. The swirling borealis is on display for over 200 nights of the year, so have your camera charged and ready. Allow some time during the day for snow-shoeing through the taiga, and then shake off the wintry chill with a traditional sauna.

Find a flight to Ivalo 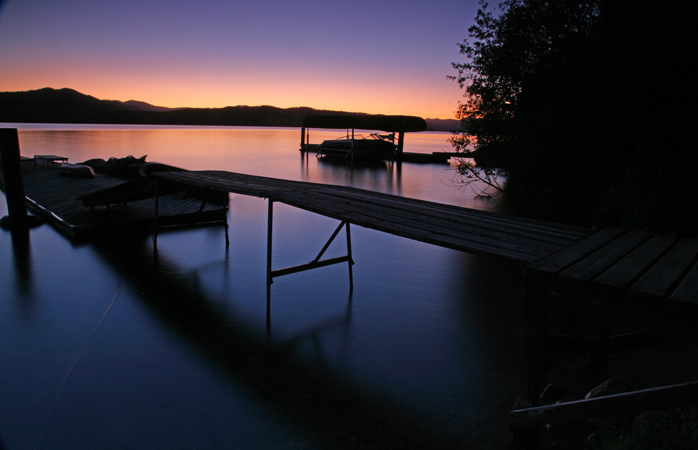 At the very northernmost tip of the Idaho Panhandle, this national park is a serene, out-of-the-way spot for taking in the northern lights. About 80 kilometres south of the Canadian border, it’s a tree-smothered, mountainous setting with next to no light pollution. Set up your tripod on the banks of the massive warm-water Priest Lake and capture the lights in the sky and reflected in the still waters. During the daytime you can spot bears, deer and moose as you trek the trails encircling the lake. Boating, fishing and sailing are also high on the agenda. If the season’s right, you can also try your hand at huckleberry picking or mushroom gathering.

Find a flight to Spokane 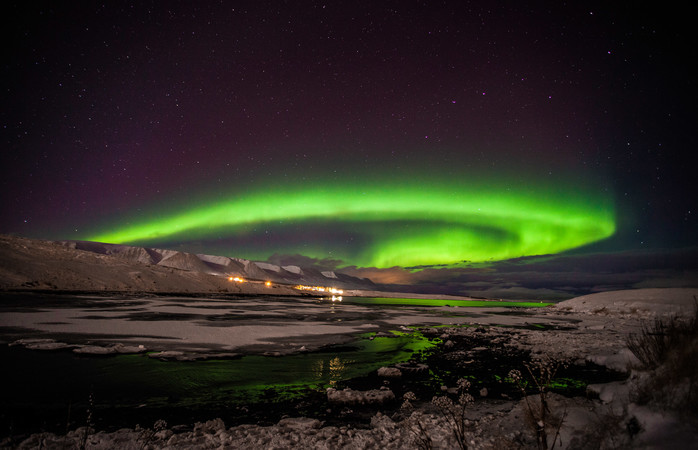 The northern lights have a folksy history in this chilly place: they’re said to be angels dancing in the sky.

In the far north of Iceland, Akureyri is Iceland’s second largest city, and it’s a cool little spot to check out while you wait for the night to usher in the aurora. Artsy cafes, trendy restaurants and boutique galleries line the streets, all fed by Eyjafjörður, Iceland’s longest fjord. When the dark arrives, settle in at the forested Kjarnaskógur, the viewing platform at Mt. Vadlaheidi or the nearby ski resort for stunning glimpses of the lights. Swimming pools, ice-cream shops and local breweries beckon along the way.

If you’re feeling bold, fly out to Grímsey Island, literally a stone’s throw from the Arctic Circle.

Planning to explore more of Iceland? Make sure to read our road trip guide through Iceland.

Find a flight to Akureyri 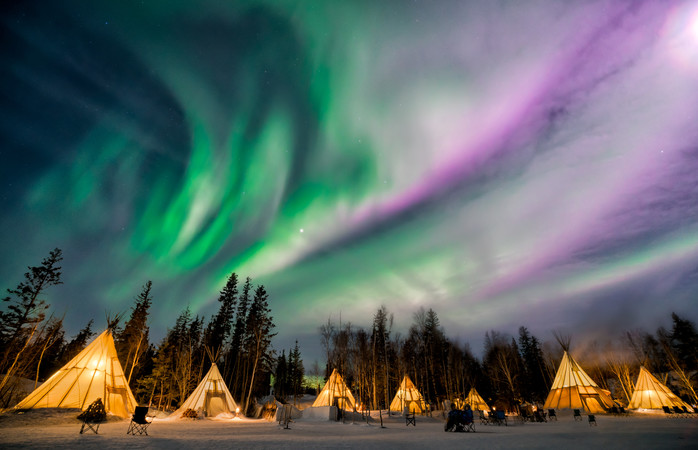 From autumn through winter, the old rush city of Yellowknife puts on an aurora spectacular like nowhere else. Charming houseboats and eclectic structures ranging from log cabins to tepees nestle against a sprawling backdrop of lush firs and jewel-like water. The expansive skies of the wilderness are just moments away, and they deliver the goods, with a 90 percent chance of northern lights viewing success. Take them in while cruising on a snowmobile, or sharpen your camera skills with an aurora photography class.

Find a flight to Yellowknife 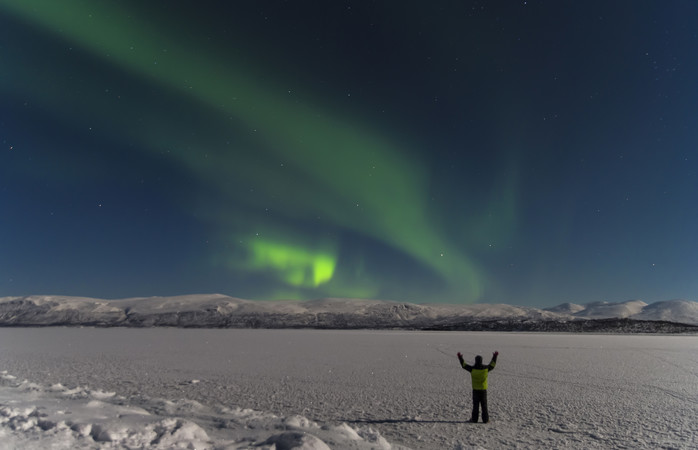 Just under the Aurora oval, Abisko brings a cloudless microclimate into the mix that ensures prime northern lights viewing. The Aurora Sky Station offers solid viewing potential, but if you want to avoid the other tourists, just head down to the harbour and enjoy the sights from there.

Viewing tours out to Abisko National Park or the surrounding Kiruna Mountains will put distance between you and any light pollution – and some provide cameras for you to capture the moment. Things book up fast here, so plan your trip ahead of time or aim to visit during the off-season.

Read more: discover more of the country with our 10-day adventure through Sweden.

Find a flight to Kiruna 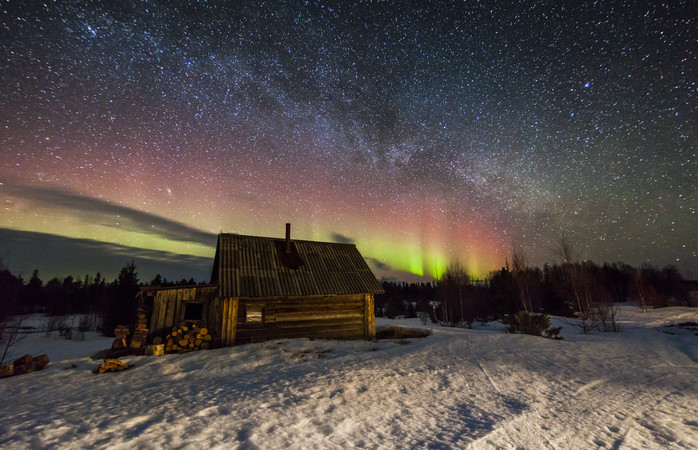 Admittedly, northern lights sightings occur about only 15-20 times each Russian winter, so you’re not looking at the same odds as a trip to Scandinavia. But how many people can say that they’ve seen the Aurora all the way out here, in one of Russia’s most frigid, unforgiving settings? Located in the extreme northwest, Murmansk is a solid 32 hours from St Petersburg by train – or you can fly if time is of the essence. While you’re waiting for night to arrive, visit ‘Lenin’, the world’s first nuclear-powered icebreaker, and explore the city’s handful of museums.

Find a flight to Murmansk 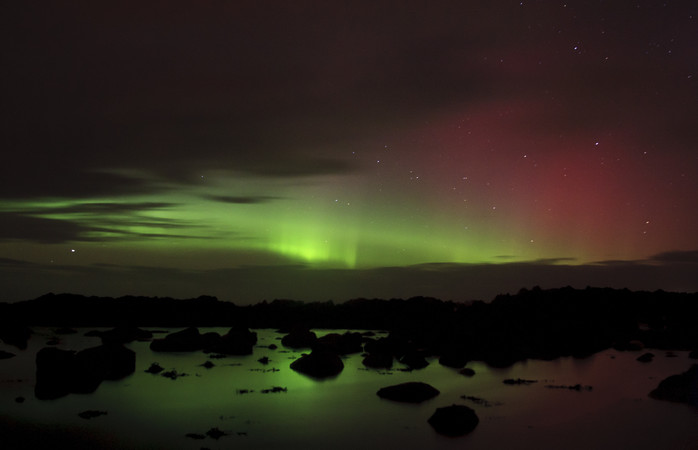 With low light pollution, this picturesque peninsula offers magnificent views of the northern lights against a backdrop of the wild Atlantic coast. Try Malin Head, Dunree, Mamore Gap and Dunaff for best viewing odds. For daytime explorations, hop on a bicycle or hire a car and drive the Inishowen 100, a signposted scenic tour. Fort Dunree, Slieve Snaght, Knockamany Bends and Five Fingers Strand are all worth a look – and don’t forget to stop at a local pub for a meal and a drink.

Find a flight to Donegal 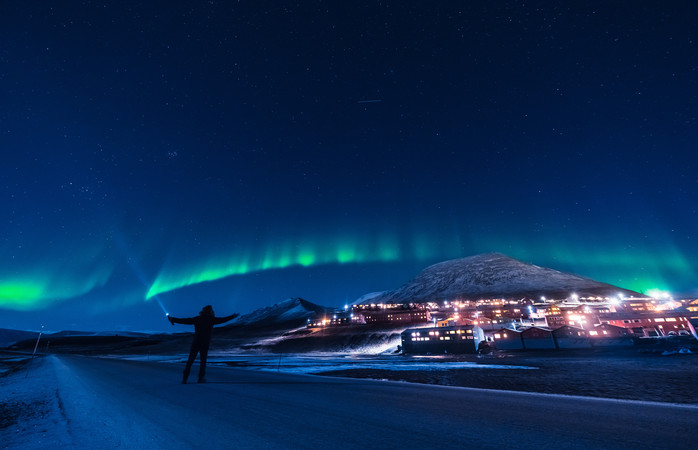 It doesn’t get any more northern than the Svalbard town of Longyearbyen. Located 900 kilometres north of the Norwegian mainland, it offers unique aurora viewing opportunities. When the polar night descends, you might even spot those tell-tale fluorescent green lights while you’re enjoying lunch. The neighbouring Adventfjorden Bay makes for an impressive northern lights photo opportunity as well. If you’re lucky enough to get some daylight on your trip, try ice caving beneath a glacier, or head out on a boat to explore the arctic landscape.

Find a flight to Longyearbyen 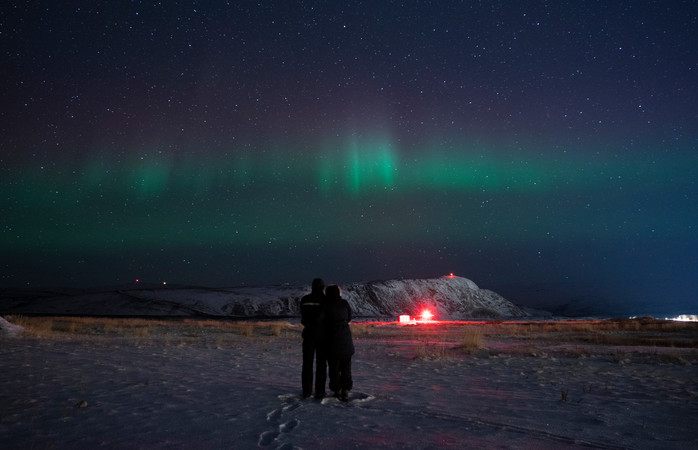 A former U.S. airbase, Kangerlussuaq is Greenland’s top spot for viewing the aurora borealis – known here by a name that translates to “souls playing ball”. Dubbed the “Gateway to Greenland”, this secluded destination is about as tranquil as it gets. It boasts an incredible 300 clear days per year, and it’s perfectly positioned right in the middle of the northern lights belt. Snow is the rule here, so plan for winter-themed explorations. Spend your days sledding, musk oxen spotting, sailing between immense icebergs or tip-toeing across the Ice Cap. Kangerlussuaq is also home to Kellyville, a radar facility used to investigate atmospheric phenomena including the northern lights.

Find a flight to Kangerlussuaq 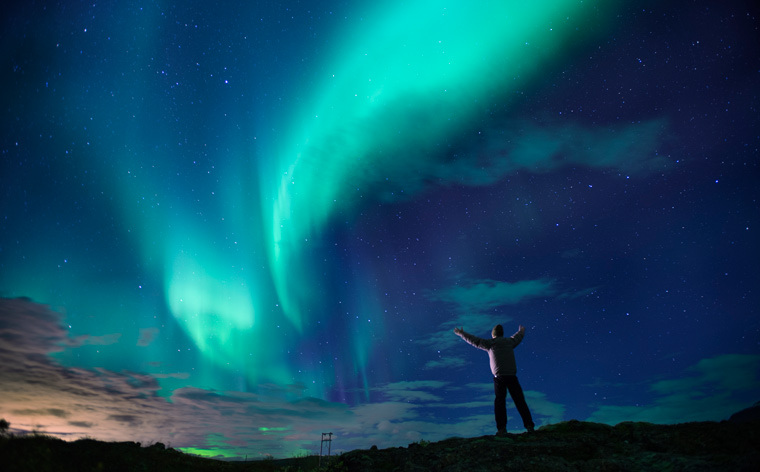 Sleep under the Northern Lights: 9 hotels with fantastic vistas 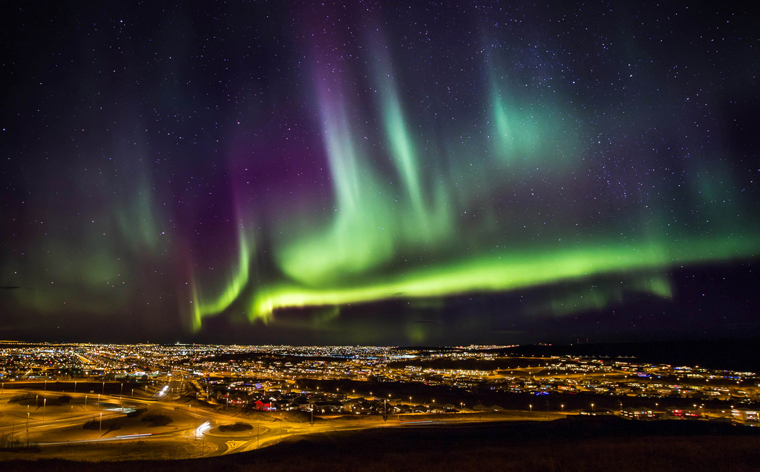 WIN a trip to Iceland to see the Northern Lights!