Find the best deals on 495 hotels in Southampton, England

Find the perfect Southampton hotel for business or leisure

Things to do in Southampton

What is the average price of a hotel near Leisure World?

If you’re planning on staying at any of momondo’s recommended hotels in the area of Southampton nearest to Leisure World, you should expect to pay around £59/night. This price fluctuates based on time of year. In general, a rate under £59/night is a good deal for momondo users staying near Leisure World. Hotels near Leisure World are typically 1% less expensive than the average hotel in Southampton, which is £60.

What is the average price of a hotel near St. Mary's Stadium?

What is the average price of a hotel near Southampton Old Green?

When to book a hotel in Southampton

Let us help you with the best tips about Southampton

Southampton experiences mild weather with no dry season. It rains almost all year round with the maximum rainfall in October, December and January. Average temperature in the summer months from June – August is approximately 20 degrees Celsius, and this is a good time to visit Southampton. To avoid the peak tourist season and get attractive deals on travel and accommodation, plan your visit in the shoulder months of April – May or September. The average temperature hovers around 17 degrees Celsius during these months and there is not much rain. The winters are cool and wet, and average temperatures stay around 6 – 8 degrees Celsius from November – February. You may also experience fog, rain, and thunderstorms during this time of the year.

The Old Town area of Southampton is easily walkable, and is best explored on foot. The CityLink bus, now called Quayconnect bus service, operates every 30 minutes between the Southampton Central train station and the Red Funnel Ferries ferry terminal. The journey time is approximately 7 minutes costing £2.00 GBP for unlimited day travel. Southampton is relatively small, and for the most part, the terrain is flat, so it is possible to explore the entire city on a bike. UK’s dockless bike-share program YoBike is now available in Southampton. Using a mobile app, riders can unlock a bike from hundreds of parking spots in the city, and ride for £1.00 GBP per hour, capped at £5.00 GBP for a full 24 hours of cycling. Taxis are easily available all over the city, and you can hail one at any of the taxi ranks, or on the street side. Driving is also a convenient option in Southampton. Metered parking is available in most locations and you can usually park for 2 – 4 hours in the city centre. If you book early, you may find the best deals for car rentals with momondo.

How much does a hotel in Southampton cost per night?

Hostels and cheap hotels in Southampton

Get the best value hotel in Southampton

Where to stay in Southampton

Best places to stay in Southampton

Often called the ‘cruise capital of the UK’, the beautiful port city of Southampton is the busiest cruise port in Europe, and has an important maritime and aviation history. The city also offers some magnificent art galleries, museums, intimate music venues and award-winning parks.

Inside UK’s best-preserved medieval Town Walls lies the Old Town of Southampton where you can step back in time and get a glimpse of Southampton’s 2000 year history. The entrance, called Bargate, along with several historic buildings, ancient vine vaults, churches, and fine Georgian houses and hotels is what you will find in the Old Town. Stay in The Pig in the Wall, a charming, boutique hotel offering individually-stylised rooms with Victorian fireplaces. It is only a 6-minute walk to Town Quay and the ferry port. You can also look at The Ennio’s Boutique Hotel Southampton, which offers well-appointed luxury rooms with designer interiors in a Victorian warehouse building at Town Quay. Another interesting accommodation housed in the building that was home to the famous author Jane Austen, is The Juniper Berry. This is a popular traditional English pub offering comfortable rooms, and located just a 2-minute walk from the High Street and the busy ferry terminal, Red Funnel Ferries.

The Southampton city centre is a transport and shopping hub with the Westquay Southampton shopping centre being the dominant landmark in this area. This neighbourhood boasts plenty of museums, galleries and historic buildings, plus a wide range of eating and dining options. In the heart of the city centre, on Oxford Street, you have the award-winning accommodation of The White Star Tavern, offering beautiful boutique bedrooms and an on-site gastropub serving delicious British fare. Enjoy a contemporary stay in the modern, stylish rooms of Cargo Southampton hotel, also located on the trendy Oxford Street. A short walk from the Mayflower Theatre and the West Quay Shopping Centre, you also have the Grand Harbour Hotel which offers stylish rooms and on-site restaurants.

A mixed-use marina at the mouth of River Itchen, Ocean Village has several residential and business developments. There are plenty of restaurants and bars, and also a few cinemas. Enjoy a luxurious stay at the stunning Southampton Harbour Hotel & Spa which features grand rooms with sea views, an award-winning restaurant and spa on site, and a spectacular rooftop bar with outdoor fire pits. Along the waterfront on Ocean Way, you also have several serviced apartments such as Ocean Village Marina Apartment, The Hawkins Tower by esa, The Moresby Tower by esa, and Sapphire Court by esa.

In The Polygon, you have the Abbey Lodge guest house which is close to several popular attractions such as the SeaCity Museum, and the Mayflower Theatre. Around the corner, in a Victorian house , you have The Mayview Guesthouse, a simple bed and breakfast offering clean, comfortable rooms. Near Old Town, you can stay at the Ibis Budget Southampton Centre hotel, set in a colourful, white and yellow building on the Western Esplanade, within a 5-minute walk from the Southampton Central train station. In a modern building across the road from Southampton Solent University, you have the Premier Inn Southampton City Centre hotel, located on New Road in the heart of the city centre, surrounded by restaurants and shopping. In a former coaching inn dating back to the 1800s, you can stay in simple, comfortable rooms at the Star Hotel on High Street.

What to do in Southampton

The port town of Southampton is slowly growing into a popular leisure and culture destination in the south of England. Southampton boasts a 2000 year old history, various heritage attractions, a bustling waterfront, and a vibrant dining and entertainment scene. There is plenty to see and do during a short stay in Southampton.

How long do people stay in Southampton?

Visiting Southampton for 1 night is the most common choice for our users.

How much does a hotel cost in Southampton?

The cost of a hotel room in Southampton will vary according to demand, location and star rating. On average, rooms will cost around £105 per night.

When is the best time to book a hotel in Southampton?

February is the cheapest month to book a hotel in Southampton. Prices can be £32% lower than other, busier months, so this is a great time to get a good deal.

Which day is cheapest to stay in Southampton?

Saturday is the cheapest day for hotel rooms in Southampton. Friday is the most expensive day.

How much does a hostel in Southampton cost?

Southampton Hostels typically cost in the region of £104 a night for each person. This price is taken from hostels and hotels with a 2 star or below rating. Hostels are very economical and come out on average £1 cheaper than the average price of a hotel in Southampton.

Based on the weather in Southampton, what attractions are popular during August?

With generally low rainfall expected (38 mm) and an average temperature of 18 °C, those staying at a hotel in Southampton may want to take some time during their visit to go see popular landmarks in the area. Considering the weather during August, attractions worth visiting near Southampton are Netley Abbey, Albert Dock, and London Bridge.

Learn more about these user-preferred hotels in Southampton 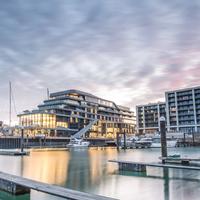 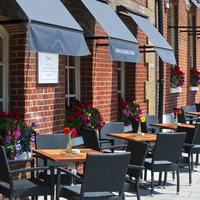 Start planning your trip to Southampton

Get the latest Southampton flight insights

Experience Southampton from behind the wheel! Learn more about the best car hire deals

Get to Southampton by train as an alternative to flying. Learn more about the best train deals here.

Enjoy a relaxing journey by bus. Learn more about buses to Southampton here.

Not set on Southampton? Search the best deals on hotels in these destinations